Churches on the move

In our day “churches on the move” likely conjures up an image of busy churches with all sorts of activities, maybe even a sideshow or two. In Baptist history, “churches on the move” are congregations that formed in one geographical location and moved to another. Perhaps the best known is “The Travelling Church,” which moved from Spotsylvania County, Virginia to the Kentucky District of Virginia – seeking religious freedom.[i]

We have a few of those “churches on the move” in Texas – three of which I am aware at the moment. The most famous is Daniel Parker’s Pilgrim Church. The minutes record its constitution July 26, 1833 in Lamotte, Crawford County, Illinois, include a meeting at Claiborne Parish, Louisiana, October 20, 1833, and show the first conference in Texas at Austin’s Colony, January 20, 1834.[ii] This was the first Baptist church in Coahuila y Tejas, and probably all of Mexico. Roman Catholicism was the official religion in Mexico, of which Texas was then a part.[iii] In Parker’s opinion, a Baptist church could not be legally organized in Coahuila y Tejas. However, to organize elsewhere and move to Texas would be permissible (or at least skirt the law without notice). Pilgrim Church, permanently located at Elkhart, Texas since 1848, is the oldest Baptist Church in the state of Texas.

Not as well-known are Pilgrim’s Rest and Prairie Lea.

Pilgrim’s Rest Primitive Baptist Church was constituted in Randolph County, Alabama, November 23, 1850, from members of the Shiloh Baptist Church. An entry in the Shiloh minutes on November 23rd states, “We, the undersigned members of Shilo church being regularly dismissed by letter and going to remove to the West, and being desirious to live in all the ordinances of the Lord and keep up a gospel discipling in his house and fearing that we might be deprived of these priveleges, agree to call a Presbytery and be constituted into a church.” This church formed for the purpose of moving west. Samuel Tine Owen, John Bunyan Owen, and Kindred K. Knight led the caravan – said to be some 150 persons, much more than just the church membership, of course. According to tradition, the group intended to strike out to California, but because of difficulties, deaths, and a pleasant stop in camp east of the Trinity River, they stayed in Henderson County, Texas. Pilgrim’s Rest in the Baxter Community is the first Baptist Church in Henderson County, and Elder Thomas Brittain the first pastor. Several area Primitive Baptist churches came from the Pilgrim’s Rest congregation, which disbanded some time before 1900.

The Prairie Lea Baptist Church was constituted in San Augustine County, Texas on June 30, 1850, several months before the Pilgrim’s Rest Church in Alabama. The original name was Shiloh Baptist Church. Elders William Brittain[iv] and Robert Turner served as the organizational presbytery. That fall the church joined the newly formed Eastern Texas Association of United Baptists. In May of 1851, this church body headed west. On June 21, 1851 they landed in the community of Prairie Lea. Prairie Lea is located in southwestern Caldwell County near the San Marcos River.  It is about ten miles southwest of Lockhart, on SH 80 between Luling and Martindale. Prairie Lea is a Southern Baptist congregation, affiliated with the district Bluebonnet Baptist Association and the Southern Baptist of Texas Convention.

Were there more traveling churches on the move in Texas Baptist history? If you know, please point us to the information! Thanks. 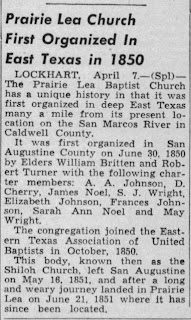 
[i] “Traveling Church,” by Thomas D. Clark in The Kentucky Encyclopedia, John E. Kleber, editor; Lexington, KY: University Press of Kentucky, 1992, pp. 897. In 1891, George Washington Ranck wrote The Traveling Church: An Account of the Baptist Exodus From Virginia to Kentucky in 1781 Under the Leadership of Rev. Lewis Craig and Captain William Ellis, which is currently available in reprint.
[ii] The Records of an Early Texas Baptist Church. I. 1833-1847.
[iii] The colonization decree of 1823 stated, “The government of the Mexican nation will protect the liberty, property, and civil rights of all foreigners, who profess the Roman Catholic apostolic religion, the established religion of the empire.” I have always heard that those who moved to Texas agreed to be Catholic. If this following typical citizenship application is accurate and common, at least in their own minds they probably did not do so, while Mexican authorities looked at it differently (and some authorities probably “looked the other way”). In the Citizenship Application of Radford Berry, he stated he was “of the Christian religion.”
[iv] I am not aware of a relationship between William Brittain and Thomas Brittain, though there may be one.
Posted by R. L. Vaughn at 9:03 PM