The Strange Case of August Tubbe 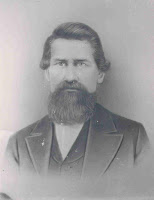 On October 21, the Nacogdoches, Texas Daily Sentinel carried an article by Josh Edwards titled The Strange Life of August Tubbe. Johann August Friedrich Tubbe was born February 17, 1841 in Oderberg, Prussia. He came to the United States in 1855, and served in the Confederate States army during the Civil War.[i] He was in Nacogdoches County at least by 1862, when he married Marie Gertrude Kolb. After the war, he took the oath of allegiance to the United States and moved on with life – which included being a saw-miller and a Baptist preacher.[ii] He organized several churches, including Saints Rest Baptist Church in Nacogdoches County (for which he donated the land), and Providence Baptist Church in Angelina County, Texas.[iii]

All went well, at least normal, until the United States entered World War I. You see, Tubbe had never bothered to get U. S. citizenship – possibly thought his oath of allegiance served that purpose.[iv] This man who had loved, lived and labored in the U. S. for over 60 years was accused of being a German spy (even at a time his namesake grandson August Louis Tubbe was serving in the U. S. Military). Eventually he was exonerated – but mostly after his death. Josh Edwards believed the stress brought on the heart attack from which he died. August Tubbe died November 18, 1918.


[i] Company A, 18th Texas Volunteers
[ii] In Rev. John August Tubbe: An Immigrant Farmer, Sawmiller, and Preacher, W. T. Block says Tubbe had preached for 52 years at the time of his death – suggesting he began to preach in 1866. Block also thinks that Tubbe grew up in the Evangelical Lutheran tradition.
[iii] Originally called the Baptist Church of Christ on Freeman Prairie.
[iv] Block writes, “On Nov. 12, 1917, August Tubbe wrote a deposition from the Smith County jail, and in it he explained that he had two older brothers in Nacogdoches, who were a naturalized citizens; also a mother, who was a citizen, and he believed that since he was only a 14-year-old minor when he arrived here, that he had been included in those naturalizations. Also when he was paroled from the Confederate Army, he had taken an oath of allegiance to the United States. He had paid poll and property taxes for 60 years, had also ran for two public offices, although defeated. Nevertheless, all of that came to naught when some one denounced him as an ‘enemy alien’ and he was arrested.”
Posted by R. L. Vaughn at 10:08 AM