My chief interest in church history is on the Baptist variety, even in research on the Bible. The following position on the King James Bible by a Methodist minister was quite surprising to me (but that may just be my lack of knowledge of Methodist history; and it is 1950). Thomas McSwain Elliott says he accepts “the Bible, the King James Version, as God’s divinely-inspired written word to me and all mankind.” He also called the King James Version “...the Bible that God inspired holy men to write.” (The Atlanta Constitution, Nov. 27, 1950, p. 9) 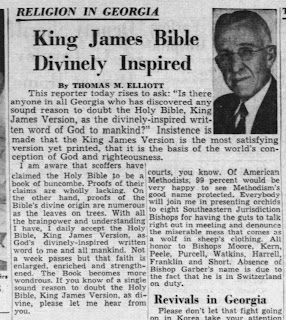 [The Journal of the North Carolina Annual Conference of the Methodist Episcopal Church, South (November 16-20, 1921, p. 57; See also page 88) indicates Elliott’s position was probably not unusual among Methodists of the time: “[6] Resolved, That the North Carolina Conference hereby memorialize our General Conference to reaffirm our faith and allegiance in the ‘King James’ version of the Bible as the standard of our church and that we refuse to indorse any other version for the use of our church in its literature or services. (Signed)…”]

I also happened across this piece where T. DeWitt Talmage “took an oath in the pulpit, on the King James Bible, that he would never use the revised Testament.”