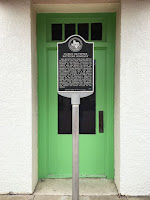 Sam Houston Prim (1863-1946) arrived in Dublin in 1891 with $680 worth of bottling equipment, purchasing property at the southeast corner of Patrick and Elm Streets to house his bottling works. Prim bottled Dr Pepper, along with other products, under an informal agreement until 1925, when he formally chose as a Dr Pepper distribution territory a 44-mile radius centered on Dublin—an area that remains as the company’s territory today. At the time of Prim’s death, Dr Pepper executives noted that he had bottled the soft drink longer than any other individual. The company has remained in operation since that time, making it the oldest Dr Pepper bottler in the world.

This marker (Number 15878) was erected by Texas Historical Commission in 2009. The marker is located on Elm Street by/in front of Dublin Bottling Works. Events after 2009 make the last sentence outdated. 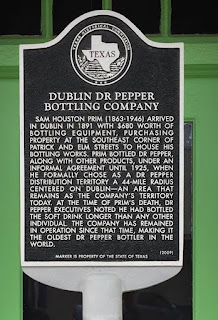 Last Tuesday we made a visit to Dublin, Texas. It was primarily for research on A. N. Whitten, but we also did a little “sight-seeing” while there (including Veldhuizen Cheese Shoppe, Erath County Courthouse, a couple of cemeteries, Clairette Schoolhouse, and some beautiful old homes). One of the sad stories of Dublin, in my opinion, is the devastation reeked on “Dublin Dr Pepper” by the big bad ogre Dr Pepper Snapple Group.[i] Cast them away, I say, and (if you drink sodas) drink sodas from Dublin Bottling Works instead of Dr Pepper. You will support a small town and one of its enterprises.

[i] Dr Pepper was (and I believe still is) the third-largest U.S. soda manufacturing company. When Dr Pepper stopped using cane sugar and replaced it with high fructose corn syrup, the Dublin plant kept using the original recipe. Its popularity – which the parent company tried to duplicate with the “knockoff” Heritage Dr Pepper (which used beet sugar rather than cane sugar). Apparently not satisfied with this solution, they later sued Dublin Dr Pepper and put an end to its existence, as well as their connection to “the oldest Dr Pepper bottler in the world.”
Posted by R. L. Vaughn at 10:58 AM