At the Saturday session of the Texas State Sacred Harp Convention, President Donald Ross made a brief talk on the history of our state organizations and showed the gavel that was presented to the State Sacred Harp Association of Texas in 1911. 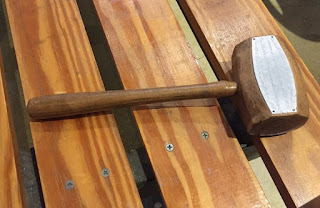 Text of the Gavel’s Inscription
Side 1:
Cut from Old Liberty Elm at Nacogdoches, Tex
Jan. 22 1911 Presented to
The State Association of S H Singers
Oct. 20 1911 by Jno W Miller

Side 2:
Under this Historic Elm the first protestant
sermon on Tex. Soil was preached 1835
Gen. Sam Houston held war council under it in 1836
Gen. R. E. Lee camped under this tree 1846 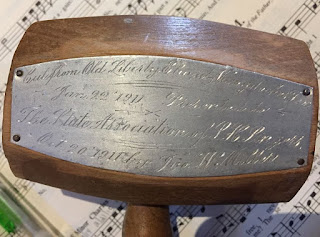 The original presentation of the gavel is recorded in the Sacred Harp Association of Texas minutes, Dallas, Texas, October 20, 1911, p. 17.

“W. T. Coston appeared on the stage and introduced Senator J. J. Faulk of Athens, Tex. who made a good talk to the members of the association and presented a Gavel to the association for John W. Miller who had cut this mallett out of the Ellem tree that stands at Nacogdoches. This tree has a state wide historical history in Tex. Senator Faulk gave the history of said tree and ask the association to reseave same and as long as the Sacred Harp association met and in case of its Desolation the gavel be presented to his son, John B. Miller and upon motion and second the Gavell was unanimously reseaved with this agreement that the Gavel be returned to John B. Miller at the abandon of the association.” 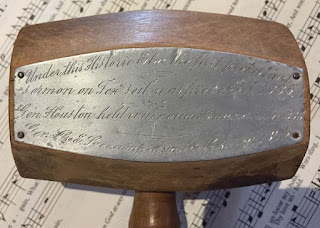 As I researched the Nacogdoches “Liberty Elm,” I discovered it may be the stuff of legends, but it had a definite recognizable history when it toppled in 1910. The Sacred Harp gavel was not the only gavel made from its wood. Gavels were made and presented to the Texas House and Senate.

In July of 1910 Mr. Dotson of Nacogdoches County presented a gavel to the House of Representatives. In the presentation he said,

“I desire to present to this body a gavel made of the wood of an historic tree at Nacogdoches situated on the bank of Bonita creek, known as the ‘Liberty Elm.’  This tree was of much importance in the history of Eastern Texas because under its branches transpired events that were of Statewide importance.

“In the early days Haydon Edwards was driven from his hut at Nacogdoches by Mexican misrule. After accumulating a force in Louisiana he came back to Nacogdoches and under this tree they declared their independence from the government of Mexico and instituted what is known in Texas history as the Fredonian Rebellion. Since which time this time has been known as the ‘Liberty Elm.’

“In the shade of this tree was preached the first Protestant sermon ever preached in Texas, and in the early days Sam Houston held his camp on Bonita creek and had his headquarters under this tree, where he mustered into service the soldiers of Eastern Texas that he used in the campaign against the Mexican government in the Texas-Mexican war. Tradition has it that Bowie, Fannin and Crockett used the shades of this tree as a camping ground when they came from the East to assist Texas in fighting for her independence. It has shaded the various people who have made the history of Eastern Texas famous. Under its boughs has stood that matchless old Texan, John H. Reagan, and the immortal Governor James Stephen Hogg.

“When Bob Lee came to Texas to participate in the war between the United States and Mexico, according to the testimony of old citizens, he camped under this historic tree. It has been the pride of Nacogdoches for many years. It had been fenced and protected, and from its historic traditions the younger generation were taught the principles of true patriotism and statesmanship. It has been considered by us as the cradle of Texas liberty. During last summer it was torn up by a storm, and I conceived the idea of having two gavels made to present one to each house as a memento from Eastern Texas of the sterling worth and integrity of her early citizenship that they may be kept as an inspiration for the younger generation.

“Mr. Speaker, I take pleasure in presenting to this House a gavel made from the old historic ‘Liberty Elm’ of Nacogdoches.

“At the conclusion of Mr. Dotson’s remarks, Speaker Marshall accepted the gavel on behalf of the House.”

In her story about “The ‘Liberty Elm’” in The Junior Historian (Volume 20, Number 6, May 1960, pp. 24-25), Ann Reed records that the F. R. Penman family acquired remnants of the tree. Initially a woodworker cut blocks on which paintings were made. Later Ed Ramsey, a carpenter made chairs from the wood for the Penman children. These chairs were later donated to the Old Stone Fort Museum, and may still be there today. Miss Reed’s assessment was that the stories of the elm toppled by a storm were apocryphal, and that it simply died of old age, April 8, 1910. The “Liberty Elm” stood “on the west bank of Banita Creek, east of the Southern Pacific freight depot, and just south of the brick warehouse near by” (Junior Historian, p. 24).

No doubt there is much meaning, mystery, and myth in the stories about the old Liberty Elm of Nacogdoches, Texas. For example, “the first Protestant sermon preached in Texas was preached under this tree” is a consistently related story. However, those who related the story are not agreed on whom the first sermon was by, and when. Some say Henry Stephenson (Methodist) in 1821, Sumner Bacon (Presbyterian) in 1828, while others say in someone else in 1835. Stephenson is known to have been in Texas as early as 1824, and was later the first Methodist minister  assigned to the Texas mission (1834). It is most likely that the “the first Protestant sermon preached in Texas” was not preached in Nacogdoches at all, but by Methodist minister William Stevenson to settlers who has crossed over the Red River into Texas near Pilot Point. This occurred around 1817. (A History of Early Methodism in Texas)

The Old Liberty Elm and the Sacred Harp Gavel tell intriguing tales and raise interesting questions. I wonder how much “sister wood” to the Texas Sacred Harp Gavel still exists, and, if so whether one possessor of it even knows of the other?
Posted by R. L. Vaughn at 9:07 AM