In a previous post I mentioned a debate that I thought I remembered. Now I have found it recounted according to the memory of L. D. Foreman (as told him by Ben M. Bogard) in The Life and Works of Benjamin Marcus Bogard, Vol. II (pp. 73-74).


This is the way it was related to me...

Many years ago there was a cattleman out in one of the western states—I remember it as being Arizona—who had made a considerable amount of money, and being a religious man, wanted to hear a religious debate. He was a Mormon. He had heard of Bogard and had written to him offering to pay his railroad fare, provide lodging and give him a certain amount of money to come there and engage in a debate with a Campbellite.

While this was not his ordinary procedure, Bogard accepted the challenge and boarded a train making his way across Texas and New Mexico toward Arizona. Somewhere along the line, the train stopped for passengers. Among those boarding was Joe Warlick, his old friend and opponent in so many debates. They immediately struck up a conversation, Bogard asking Joe where he was going? Warlick replied that he was going to a debate but he didn’t know who his opponent was. Since Bogard was in the same situation, they compared notes and found they were going to the same place, hired by the same man.

They arrived and were placed in a house on the ranch, each having his own private bed in a private room, but the wall of the house was so thin they could lie on the bed and talk to one another. The sessions were held in a school house, and, apparently, to a packed house. There was neither a Baptist nor Campbellite Church in the whole country.

They had just gotten started into the debate, apparently, the first day or two. Bogard laying on his bed and Warlick his, Uncle Ben asked, “Joe, suppose you just mop up the ground with me out here in this debate, whip me all to pieces, what have you gained?”

Then Bogard said, “Suppose I whip you. Suppose I put you to utter shame. What have I gained?”

Again, Joe answered, “Nothing.” There was no cause for either of these debaters to represent in that particular community.

Bogard observed, “You know there’s lots of Mormons out here and, in fact, the rancher who has us hired is a Mormon. Why don’t we team up together and whip these Mormons?”

Then it was that Warlick chuckled and said, “Now, hold on a minute. Let’s don’t stir up more snakes than we can kill!” They did “team up,” however, and exposed Mormonism for the rest of the debate.

Foreman’s memory of the telling may be slightly off, if this incident was connected to the debate held in Duncan, Arizona in December 17-21, 1919 (which he thought it was). From the following newspaper article we see that Warlick knew he would be debating Bogard before he boarded the train to leave Phoenix for Duncan, and another article in the same paper shows the Church of Christ in Phoenix announcing it over a month before it took place. In addition, Duncan is east of Phoenix, some 200 miles, rather than west. Perhaps the discovery by Bogard and Warlick occurred on an earlier train trip. 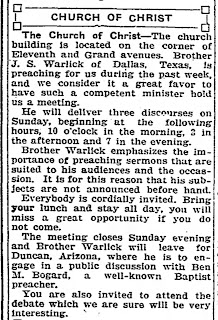