This marker is located at the site of the old Shoal Creek Baptist Church meeting house, in Cleburne County, Alabama, in the Talladega National Forest. 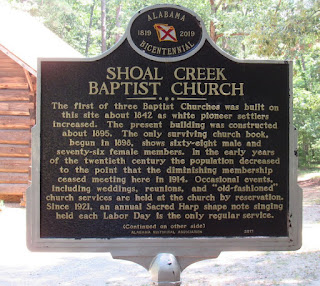 This marker has text on both sides.
Side 1:

SHOAL CREEK
BAPTIST CHURCH
The first of three Baptist Churches was built on
this site about 1842 as white pioneer settlers
increased. The present building was constructed
about 1895. The only surviving church book
begun in 1898, shows sixty-eight male and
seventy-six female. In the early years
of the twentieth century the population decreased
to the point that the diminishing membership
ceased meeting here in 1914. Occasional events,
including weddings, reunions, and “old-fashioned”
church services are held at the church by reservation.
Since 1921, an annual Sacred Harp shape note singing
held each Labor Day is the only regular service.
(Continued on other side)
ALABAMA HISTORICAL ASSOCIATION 2017

SHOAL CREEK
BAPTIST CHURCH
(continued from other side)
The 2.83-acre site is private property surrounded
by the Talladega National Forest: the U. S. Forest
Service maintains the road leading to the site.
For more than a century, descendants of early
settlers have periodically maintained the building
and its adjoining cemetery. In 1986 they formally
organized the Shoal Creek Church Preservation
Society under the leadership of William Lee
Jones, grandson of an original builder. This
non-profit entity represents scores of area families
bearing such names as Cheatwood, Holley,
Edwards, Coleman, Roach, Dunn, Thompson,
Johnson, Knighten, and Jones.
ALABAMA HISTORICAL ASSOCIATION 2017

This marker was erected, dedicated, and unveiled on Monday, September 4, 2017, at the annual Labor Day singing at the Shoal Creek Church. The Shoal Creek church web site presents pictures of the dedication and gives the original text for the marker, some of which was not included. Concerning Sacred Harp, the wording was slightly different: “A Sacred Harp shape note singing, begun in 1921, occurs here every Labor Day, drawing hundreds. While this is the only scheduled event each year...”
Posted by R. L. Vaughn at 10:33 AM