Mark Buch and the KJV 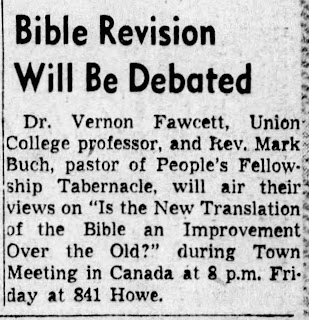 The Vancouver Sun, Thursday, November 27,1952, p. 23
For his fierce opposition to the new Revised Standard Version as “a fraud and a deception slipped over on the common people,” fundamentalist pastor Markvor Buch won the title “The Burning Buch.”[i] Many have not heard of him.

In 1995, in his book For Love of the Bible, David W. Cloud mentioned Canadian pastor Mark Buch as a defender of the King James Version Bible.[ii] Cloud has noted various defenders of the KJV outside the purported trilogy of “Wilkinson, Wray, and Wruckman.” The anti-KJV crowd sells stock in this trilogy line. It makes a great strawman argument. They hold up an Adventist, Plagiarist, and Extremist as the originators of the “King James Only” view of the Bible. The anonymous Ruckmanism.org website downplays the contributions of Buch, since persons such as he do not help sell any of their stock. The article “First Influence” questions the actual beliefs of Buch about the Bible. Further, it claims that no KJV defender “has written mentioning Buch as having influenced him” and that no one has listed “Buch in the bibliographies of their writings before David Cloud mentioned him.” Buch’s own pronouncements clarifies the first question. The latter ignores the influence a preacher has through his preaching ministry.[iii] It is not necessary for Buch to have written a book to be influential. Further, if he did not write a book, he would be listed in no one’s bibliography.[iv]

Mark Buch was saved in 1931. Shortly thereafter he felt called into the ministry.[v] He studied under William Aberhart at the Calgary Prophetic Bible Institute. He was ordained Friday May 13, 1938.[vi] He pastored Emmanuel Baptist Church in Vancouver, British Columbia, before organizing the People’s Fellowship in 1939.[vii] Buch preached at churches and Bible conferences in the United States, including Bob Jones University. He shared platforms with other notable fundamentalists such as Ernest Pickering, J. Frank Norris, John R. Rice, G. B. Vick, and Charles Woodbridge. Bob Jones, Sr., Ian Paisley, P.W. Philpott, Ernest Weller (China Inland Mission), and many others spoke at People’s Fellowship Tabernacle in Vancouver. In the late 1960s, he served on the BJU cooperating board of trustees.[viii] In 1977, Charles Woodridge and the Community Bible Church made Mark Buch an associate minister. Whatever this involved, Buch continued to pastor the People’s Fellowship Tabernacle.[ix] The announcement stated that Buch “is widely known, both in Canada and the U.S.A, as a radio preacher of great power. His cassette tape ministry is a blessing to multitudes.” Woodbridge also said, “Mr. Buch and I are of one mind in proclaiming the inerrant inspiration of the Bible and the purity of the church—and all this against the fearful odds of modern ecumenical compromise.”[x]

Markvor Buch was born in Denmark, November 30, 1910. He came with his family to Canada in 1924. He learned his ABCs from an Irish schoolteacher, and later mastered the English language “by repeated reading of the Authorized (1611) version of the Bible.”[xi] He spoke Danish as well as English, and was able to preach in both languages. Early sermon titles suggest an interest in the “Bible versions debate.”[xii] His opposition to the Revised Standard Version brought his Bible views to the fore. Unlike some other fundamentalists, Buch’s message was not just negative toward the RSV, but positive toward the King James Version. He traveled widely and spoke at rallies opposing the RSV. Announcing a rally at People’s Fellowship Tabernacle, the newspaper reported “Mark Buch will cite objections to key texts, and deal with original sources, ‘to prove why the King James’ version is the divinely-preserved Word of God to English-speaking peoples of the world.’”[xiii] Speaking at this rally, “He [Mark Buch, rlv] reiterated an earlier claim the King James version was the only true version of the Bible.” He further pointed out that the RSV’s claim “to change only the wording of the scriptures ‘is a fraud’.”[xiv] On November 28, 1952, Mark Buch debated Vernon Fawcett, professor of Union College at the University of British Columbia, “Is the New Translation of the Bible an Improvement Over the Old?”[xv] In December, he traveled to Calgary for a rally at the Bethel Baptist Church, telling the crowd “the battle for these two books will go down in history as the greatest battle of the 20th century.”[xvi]

In June of 1953, Pastor Buch wrote a series of four articles for The Vancouver Province newspaper – apparently initially intended to be three:

“Rev. Mark Buch, pastor of the People’s Fellowship Tabernacle, Vancouver, has forwarded a series of three articles on his opinions as to the true Bible and its origin. The Province prints these articles in the hope that they, along with the recent series on ‘The Revised Standard Version,’ by Dr. Ernest Marshall Howse of the United Church, will help its readers to draw their own conclusions.”

In the first article, he discusses three theories of inspiration; the fact we do not possess the originals, but that God has preserved his word; and the pure and impure streams of the Scriptures. He sets the Revised Standard Version in the impure stream, but does not yet discuss the AV/KJV per se. He does write, however, “To say then that one believes in the verbal inspiration of the original only, holds little encouragement today for those who grope for the truth, for what good are inspired originals which are lost? Have we then lost the faultless Word of God? No!”[xvii]

In the second, Buch delineates two lines of Bibles. “The big question to us then is not, ‘Did God inspire the original manuscripts?’ We know that He did, but has God preserved that perfect revelation through time in copying and translation? Again and again the Word itself emphatically states He has...I have now brought you along the path of pure Scriptures to the era of the translation commonly known as the Authorized Version of the Bible. Thus you see the basis of the Authorized Version is the oldest and purest in the world. It springs from a line and history altogether different from the spurious line, such as the Revised Standard Version.”[xviii]

In the third, Buch defends the King James Bible as best. “Has God preserved His Word intact for this generation? If it were lost in the passing of the original manuscripts, then with it has also passed the doctrine of individual responsibility to God. Then at best we shall drift on and on until we become shipwrecked upon the dark reefs of eternity’s unknown night…Let me sum up this article by saying that the Authorized Version is a correct translation of a perfect copy of an infallible original.”[xix]

In the fourth and final article, Buch compares of texts of the two Bibles, KJV and RSV. He writes of the King James Version, “This Book is God’s peculiar gift to the English-speaking world. Read it! Heed it! Believe it!”[xx]

Buch had a local ally in W. M. Robertson, pastor of the Metropolitan Tabernacle. “A number of Fundamentalist and other ministers are also opposed to the new version. Rev. W. M. Robertson in Metropolitan Tabernacle [bold original] on Sunday evening, entitling his sermon “The Unholy Bible,” will assert that ‘the extravagant claims made for the new version are not warranted by the facts, and any minor gains of languages are more than offset by grave errors that undermine some of the vital truths of the Gospel.”[xxi] In another issue of The Sun reported,

“Because of the controversy over the new version of Scripture, Rev. W. M. Robertson in Metropolitan Tabernacle [bold original] on Sunday evening will speak on ‘What Bible?’ with special reference to the claim that the King James version is the only true one. He will assert that from the days the Church has been in possession of a truly authentic Scripture.”[xxii]

David Cloud relates from Buch’s scrapbook: “In the Fall [probably circa 1933, rlv] I went back to the Prophetic Bible Institute in Calgary [William Aberhart’s school]. I came to the second year of Apologetics. It opened the subject of Divine Inspiration and preservation in particular, of the original manuscripts.” In the scope of the Institute’s “Apologetics B” course, Buch would have learned:

1. It establishes the infallibility of the Bible and proves its claim to divine inspiration.

2. It traces the sources of the various versions and establishes the divine inspiration of the Authorized Version.

3.It examines the difficult passages and apparent contradictions and demonstrates the perfection and harmony of the Bible as a whole.[xxiii]

Mark Buch maintained a pro-KJV position over the course of some 60 years, and defended it against various comers. Pastor Markvor “Mark” Buch died at his home September 22, 1995, leaving behind family members, wife, Sylvia; daughter, Ingrid; son, Wesley; and many other family members. He is buried at Ocean View Burial Park in Burnaby, Vancouver, British Columbia.

Those who refuse to acknowledge “The Burning Buch” as a “King James Only” advocate have their proverbial heads buried in the sand.[xxiv] 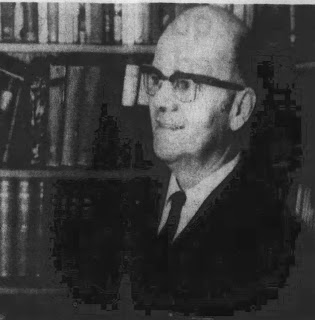