Lockman and Logsdon, no urban legend

An urban legend
This is a brief summary of something on which I am working for the future. I am posting the summary because I am also posting an e-mail I received from the Lockman foundation, and some of this is needed to explain it.
Back in 2002, someone on the Baptist Board using the moniker LRL71 wrote:

“There is an ‘urban legend’ out there that a man by the name of Frank Logsdon, who was supposedly a ‘co-founder’ of the NASB, had ‘recanted’ his associations with the Lockman Foundation and the NASB. KJV-onlyists have placed this (mis)information in their tracts as proof that the NASB is unequivocally the most perverse translation out there.”

KJV-onlyists have contributed to the confusion, making claims that Logsdon never made, such as:
What Frank Logsdon actually said:

So…back in, oh, what was it, 1956, 57, Mr. F. Dewey Lockman of the Lockman Foundation – one of the dearest friends we’ve ever had for 25 years, a big man, some 300 pounds, snow white hair, one of the most terrific businessmen I have ever met. I always said he was like Nehemiah; he was building a wall, and you couldn’t get in his way when he had his mind on something; he went right to it; he couldn’t be daunted. [I] never saw anything like it; most unusual man; very unusual. [I] spent weeks and weeks and weeks in their home, real close friends of the family.
Well, he discovered that the copyright [on the American Standard Version of 1901] was just as loose as a fumbled ball on a football field. Nobody wanted it. The publishers didn’t want it. Who would want it? Nobody wanted it. It didn’t get anywhere. Mr. Lockman got in touch with me and said, “Would you and Anne come out and spend some weeks with us, and we’ll work on a feasibility report; I can pick up the copyright to the 1901 if it seems advisable.” Well, up to that time I thought the Westcott and Hort was the text. You were intelligent if you believed the Westcott and Hort. Some of the finest people in the world believe in that Greek text, the finest leaders that we have today. You’d be surprised; if I told you, you wouldn’t believe it. They haven’t gone into it, just as I hadn’t gone into it – just taking it for granted.
Well, at any rate, we went out and started on a feasibility report, and I encouraged him to go ahead with it. I’m afraid I’m in trouble with the Lord. [Because] I encouraged him to go ahead with it. We laid the groundwork; I wrote the format; I helped to interview some of the translators; I sat with the translators; I wrote the preface. When you see the New American Standard, they are my words. Well, when I my copy (I got one of the fifty deluxe copies, that were printed; mine was number seven, blue—a light blue cover.) But it was rather big and I couldn’t carry it with me, and I never really looked at it. I just took for granted that it was done as we started it, you know, until some of my friends across the country began to learn that I had some part in it and they started saying, “What about this; what about this?” Especially Dr. David Otis Fuller in Grand Rapids. I’ve known him for 35 years, and he would say (always called me Frank; I’d call him Duke), “Frank, what about this? You had a part in it; what about this; what about this?” And at first I thought, now, wait a minute; let’s don’t go overboard; let’s don’t be too critical. You know how you justify yourself the last minute. [But] I got to the place where I said, “Anne, I’m in trouble; I can’t refute these arguments; it’s wrong; it’s terribly wrong; it’s frightfully wrong; and what am I going to do about it?” Well, I went through heart searching—some real soul searching for about four months, I don’t know, I think [it was] about four months; and I sat down and wrote the most difficult letter of my life, I think.
I wrote to my friend Dewey, and I said, “Dewey, I don’t want to add to your problems,” ([he] had lost his wife some three years before;  I was there for the funeral; [also] a doctor had made a mistake in operating on a cataract and he had lost the sight of one eye and had to have an operation on the other [one]; he had a slight heart attack; had sugar diabetes; a man seventy-four years of age) but I wrote and said, “I can no longer ignore these criticisms I am hearing and I can’t refute them. The only thing I can do—and dear Brother, I haven’t a thing against you and I can witness at the judgment of Christ and before men wherever I go that you were 100% sincere,” (he’s not a translator; he’s not schooled in language or anything; he was just a business man; he did promoting; he had the money; he did the promoting; he did it conscientiously; he wanted it absolutely right and he thought it was right; I guess nobody pointed out some of these things to him, when it was finished), but nevertheless, I said, “I must under God renounce every attachment to the New American Standard.”

[This transcript will vary from most (if not all) that are available online, as they tend to smooth out the speech patterns, while I have tried to capture them – hopefully to give the feel that Logsdon is speaking extemporaneously. This was not a written speech. So, for example, when he mentions 1956 or 57, he does not have a paper before him but is remembering when he thinks it happened. However, this way of transcribing might make it harder to comprehend at times. I recommend listening to the audio to overcome that problem. This recording had to be made after the death of Dewey Lockman, January 11, 1974 and before the death of Franklin Logsdon, August 13, 1987. I believe external and internal evidence indicate that it was most likely recorded in 1974.]
The urban legend or Christian myth aspect of this saga is that it “grew legs and walked upright.” However, there is a real story underneath, which I am working to uncover. Discounting the later debaters who dispute from their preconceived prejudices, I believe the main witnesses tell the truth to the best of their abilities. There are a number of discrepancies in the stories, but I suspect none are lies – just various people telling a story as they remember it from their own vantage points. At this time I believe if sufficient records can be found it will clarify and harmonize most of the discrepancies. Perhaps some day some people will care about the truth of the matter more than the advantage they can obtain in an ongoing debate!
Logsdon, the man and the preacher
Stuart Franklin Logsdon (1906-1987) was born in Eckhart Mines, Allegany County, Maryland, March 20, 1906 to Joseph Franklin Logsdon and Ada Elizabeth Deffenbaugh. He married Anne Nicholson Lauder (1906-1998) in 1932. They had one child, Elizabeth Elaine (Betty) Logsdon. Stuart Franklin Logsdon passed away on August 13, 1987 in Largo, Pinellas County, Florida. He and his wife are buried in Serenity Gardens Memorial Park in Largo.
For about 30 years Logsdon pastored churches in Maryland, New York, Pennsylvania, Ontario (Canada), Illinois, and Michigan. In 1930, he was living at Rawlings in Allegany County Maryland and was a minister in the Rawlings Methodist Episcopal Circuit, including Cresaptown Methodist Episcopal Church. Sometime afterward he affiliated with the Baptists, going to Grace Baptist Tabernacle in Buffalo, New York in 1932. Logsdon was a respected pastor. He pastored Bethel Baptist Church, Erie, PA (late 1936-circa 1942; a GARBC-affiliated church), Central Baptist Church in London, Ontario (1942-50), Moody Memorial Church, Chicago, IL (Dec 1950-Sept 1952),  Immanuel Baptist Church, Holland, MI (1952-58). He taught at London Bible Institute in Ontario, Canada. He participated in Bible conferences and other meetings with such men as M. R. DeHaan, Billy Graham, Roy Gustafson, Bob Jones, Robert T. Ketcham, R. G. Lee, J. Vernon McGee, Stephen Olford, Dwight Pentecost, Charles Ryrie, Lehman Strauss, George Sweeting, H. O. Van Gilder, John Walvoord. According to news reports, Logsdon was the “main speaker each morning” at the national meeting of the Conservative Baptist Association in 1964 in Long Beach, California. Publishers of his books include Back to the Bible, Moody Press, Regular Baptist Press, and Zondervan. Perhaps Logsdon is best identified as an independent Baptist who moved in conservative non-denominational circles.
Moody Church has some of his sermons online:
Sermons The Moody Church 1949-1952
Though Logsdon may not be well remembered today, he was well known among conservatives and fundamentalists in his day. His stand against the NASB may be part of the reason that he and his books are no longer promoted in the same circles in which he mainly moved. 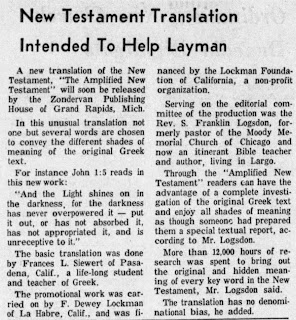