In a December 5th issue of his newspaper, Editor Oliver Emmerich thought it would be interesting “to know the reaction of McComb ministers to the new Bible which was recently published” (that is, the Revised Standard Version). Concerning their reaction, Emmerich said it was not an effort to put them on the spot, but to get “an enlightened viewpoint from the local ministers who are close to our people.” I did not notice whether any local ministers replied. However, a prominent local lady did.[i]

Mrs. R. G. Burt (nee Fannie Crawford) responded.[ii] She said she was “neither a preacher nor a preacher’s son,” She was, however, “a Christian that believes the Word of God shall stand forever.” Mrs. Burt defended the Christians in Shelbyville, Tennessee who intended to burn a copy of the RSV, stating that they were “real Christians who believe the whole Bible and do not believe in committing the Jehudi Act [referring to Jeremiah 36:23, rlv] by cutting out things that prick their hearts.”[iii] She considered the new version “the interpretations and explanations of Modernists, Liberals, Evolutionists, Unitarians, and Infidels. This gang wants a new Bible because the King James Version embarrasses them and shows them up.”

Concerning “local pastors being put on the spot,” she thought it “their duty to tell all the people whom they were instrumental in getting them to purchase this unholy Bible that at last they were wrong in being so easily led themselves by this anti-Christ gang.” She complained, “Southern Baptist [who] used whole pages in their literature and different religious periodicals, recommending it in their state papers should also be ‘put on the spot’.” She thought a “real God-called preacher is always willing to acknowledge his error, or admit he had been misled or hoodwinked.”

She concludes in mentioning several things she finds wrong with the RSV. Concerning Isaiah 7:14, she states, “If Mary was merely a young woman and not a virgin she was guilty of adultery, which is attributed to her by the Christ haters of the Centuries.” Not fooled herself, she nevertheless asserts, “If I had been fooled into buying this false blasphemous Bible I would do as the people of Shelbyville did.”

“May God have mercy upon those who have meddled and tampered with the Word of God.” 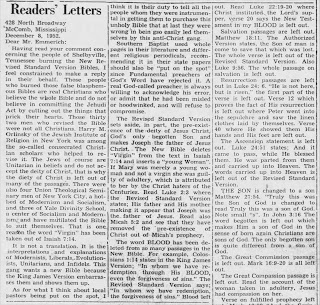 [i] “High-lights in the Headlines,” McComb Enterprise-Journal, Friday, December 5, 1952, p. 1.
[ii] Though she was not “a preacher’s son,” Fannie Estelle Crawford Burt was the granddaughter and great-granddaughter of Baptist preachers – her grandfather being Benjamin Alexander Crawford. Fannie Burt and my wife are both descendants of preacher sons of Elder Jesse Howell Crawford, an early leader in the Mississippi Baptist Association.
[iii] In the end, the Shelbyville pastor decided against burning the RSV. Some others did burn it, or at least a page or pages from the RSV.
Posted by R. L. Vaughn at 9:33 AM