Theodosia Ernest, the Heroine of Faith

Yesterday I noticed that the full name of my wife’s paternal great-grandmother is Theodosia Ernest Propes. I had not noticed before. Noticing this made me think of the book, Theodosia Ernest: or, The Heroine of Faith. Perhaps her father and/or mother were fans of the book, and she was named after the heroine.  Theodosia Ernest is an interesting and important piece of Baptist history.

Theodosia Ernest was written by a Baptist preacher named Amos Cooper Dayton. He was born in 1813 at Plainfield, New Jersey. He died in 1865, and was buried in the Evergreen Cemetery, Houston County, Georgia. Dayton was raised Presbyterian, and is supposed to have written Theodosia Ernest soon after he converted to the Baptist faith, perhaps in 1853 In this work of fiction he puts forth an argument and defense for immersion baptism. On the marker they erected at his gravesite in 2005, the Georgia Baptist Historical Commission calls Theodosia Ernest the “1st Southern Baptist Novel.”

A. C. Dayton was a preacher and writer – also a dentist, editor and teacher, who is sometimes considered a member of the “Great Triumvirate” of Landmarkism. His writings also include Theodosia Ernest (Vol. 2): Ten Days’ Travel in Search of the Church, Emma Livingston, the Infidel’s Daughter, and  Pedobaptist and Campbellite Immersions. According to James Taulman, Dayton’s first sermon in 1852 was on the ‘Love of God’ from the text Ephesians 3:17-19, and that this topic and text was also Dayton’s last sermon in May 1865.

For a different format of the book, if you prefer: Theodosia Ernest: or, The Heroine of Faith 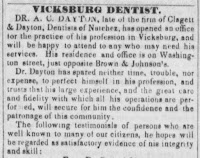 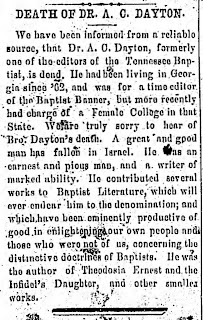