Wyatt Vaughn came to Texas before the Civil War. Wyatt came from Greene County, Georgia and settled in Rusk County. He had a half-sister, Rebecca Astin. Wyatt bought land in the Stockman League in October of 1854 from Clinton D. Holleman, and again in February 1860 from James King.[i]

Wyatt and his son John joined the Texas State Guards (Company B), and both died of typhoid fever at Galveston (March 28 and March 25, 1864, respectively) during the Civil War. Eliza Vaughn died January 8, 1887 and was buried in the Shiloh Cemetery.

The church was the center of interest for many of the Vaughns. The children of Wyatt and Eliza were active members of the Smyrna Baptist Church in the Oak Flat Community. V. T. and M. L. were ministers, and W. T. (called “Bud”) was a deacon. William W. Vaughn, son of V. T.; Benjamin L., son of M. L.; Raymond R. Scruggs, son of Olenza Vaughn Scruggs; and Roe T. Holleman, son of Nancy Jane Vaughn Holleman, were Baptist ministers. John F. Vaughn, son of W. T., was a deacon at Smyrna. M. L. Vaughn had two grandsons who served as deacons at Smyrna and one grandson who was a Baptist preacher (all now deceased). There are also two living great-grandsons and one great-great grandson of M. L. who are Baptist ministers.

At the time this history was written, the oldest living descendant of Wyatt Vaughn was Simeon Levi Vaughn, son of M. L., and the youngest Vaughn descendant was Zechariah, great-great-grandson of M. L. Vaughn. Uncle Levi has since passed away, and others have been born.

[i] “Brother Wiatt Vaun” applied for letters of dismission from White Plains Church for himself and Eliza on November 12, 1852. Since he both bought land and had a daughter born in Texas in 1854, we might guess that they lived with relatives until they were able to purchase land and build a home. Vincent Thornton Vaughn was named after Baptist preacher Vincent Thornton. 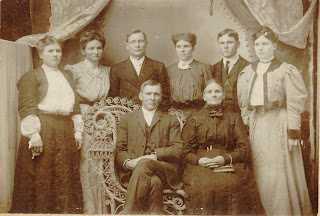