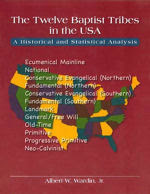 Albert Wardin, a native of Oregon, USA, served as professor of Western Conservative Baptist Theological Seminary and Judson Baptist College. He is now professor emeritus at Belmont University in Nashville, Tennessee. He is author of eight other books, including Baptist Atlas, Baptists Around the World, Tennessee Baptists: a Comprehensive History, and Gottfried F. Alf: Pioneer of the Baptist Movement in Poland.

I have long been a follower of the work of Albert Wardin in Baptist taxonomy. There is (and can be) no "standard list" of Baptists (p.14). In my opinion, Dr. Wardin's work does the best in making sense of the diverse Baptists dotted across the American landscape. I have followed his basic divisions in my own attempts of sorting out Baptists and their classifications. My first impression when he mentioned the idea of "twelve tribes" in an e-mail to me was that it might seem labored in order to make the Baptist divisions in the US fit exactly twelve. Heretofore, based on Wardin's work I have used six classifications. For example, see Another outline of Baptists in the US. Being "non-progressive" and usually satisfied with things as they are, I was hesitant for Wardin to create a new system! But my initial reaction after seeing the book was that the 'twelve' tribes fit rather well. He credits Anabaptist World USA with giving him the idea of dividing Baptist groups into 'tribes'.

The inital section of the book includes a handy list of abbreviations, followed by the preface and introduction. The main body of the book is divided into "Baptist Bodies by Tribe" and "Distribution of Baptists by Region and State". These are followed with the endnotes and 16 excellent pages of color-coded maps. These maps show Baptist distribution throughout the United States, based on statistics gathered in the 2000 Religious Congregations and Membership study. That study was sponsored by the Association of Statisticians of American Religious Bodies and the Glenmary Research Institute. The maps published in Twelve Tribes were not published in the RCMUS study.

In his introduction Wardin highlights the study of Baptists, with its problems and pleasures. He discusses the background and development of Baptists, their number, and problems inherent in classifying Baptists. Why is there so much diversity? What are some of the problems? Should Baptists be classified by name or affiliation?* By name or theology?** How can Baptists be grouped generically? What about dual affiliations? Independent churches? Ethnic bodies? Shifting categories? Is the Cooperative Baptist Fellowship a denomination? There are problems of statistical analysis as well. Some bodies keep detailed records and even report them to other sources. Some bodies collect no data, and a few may even be suspicious of sharing statistical information.

In Twelve Tribes, Albert Wardin "...describes each tribe with its respective bodies and then will follow with a section on their numerical distribution by region and state."

The numerical section is divided into three parts -- a regional listing by number of members and/or attendance and number of churches, a description of the Baptist presence in that region, and a listing of number of members and/or attendance & number of churches by state (within each region). The United States is broken into ten geographical regions -- basically following that of the census regions, with minor changes to fit the Baptist landscape.

In his introduction Wardin observes, "If one takes the time to notice, one should be able to see that the various tribes have probably far more in common than the elements that divide them. (p. 14)" This book should be in the libraries of every Baptist educational institution and every student of Baptist history and taxonomy. Why, it should be in the hands of every Baptist. It will help them understand more about who they are.

* For example - the Cumberland River Association was named "United Baptist" but affiliated with the American Baptist Association. [Recent minutes indicate they have since dropped "United" from their association name.]