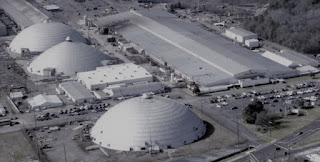 I grew up about 40 miles south of Longview, Texas. My oldest sister and brother-in-law lived there several years – right behind LeTourneau College. A trip to their home always took us past the large and unusual landmark domes of LeTourneau Manufacturing. Both the college and the manufacturing were born of the mind of Robert Gilmour “R. G.” LeTourneau. As a child his name meant little to me, though later I would learn he was a well-known and well-respected Christian businessman and philanthropist.
Over 50 years later I learned the history of the “domes.” Known to me as the home of his manufacturing, the original dome was actually built in 1953 for a friend of R. G. LeTourneau – Billy Graham. The structure was built as a tabernacle to seat 12,000 for Graham’s crusades. Graham intended to ship one to England for a crusade there. However, a recent local news piece quoted a company spokesman (now owned by Komatsu Ltd.) saying that England refused to allow the structure to be erected there. “It was built specially for (the Rev.) Billy Graham. It was never supposed to be here,” unofficial company historian Dale Hardy said, explaining the American evangelist wanted a portable, 12,000-seat venue for his crusade in England during the early 1950s. “England turned him down from a permit standpoint,” Hardy said.
Nevertheless, Mr. LeTourneau apparently liked the design. The company eventually built and used five of them for the manufacturing business in Longview.