Back in 2016, I posted about the song The Church That Jesus Built by R. N. Grisham. This song was Dedicated to the American Baptist Association. Then, I tentatively identified Grisham as Rufus Norton Grisham (1877–1936), who is buried at the Hickory Grove Cemetery at Laurel in Jones County, Mississippi. I believe that identification is correct. A friend on Library Thing has put together some information that supports this, and I post the following picture of Grisham with his permission. 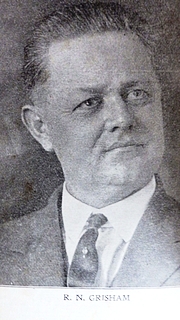 Grisham also taught singing schools. For example, an ad in the Jones County News (November 14, 1912, p. 11) identifies R. N. Grisham as “Principal” of the Analytical and New Light Music School, to be held at Indian Springs and continuing 6 days a week for four weeks. When Grisham registered for the World War I draft in September of 1918, he was living in Greenville, South Carolina. He listed his occupation as “Vocal Teacher” and his employer as James D. Vaughan of Lawrenceburg, Tennessee.[i]  The (Laurel) Morning Call in 1928 describes him as “an evangelistic singer, song publisher and has conducted several normal schools in the county.” The article also indicates Mr. & Mrs. Grisham recorded on Columbia Records a song called We’ll Be At Home Again.[ii] (The Morning Call, March 22, 1928, p. 3)

R. N. Grisham was the son of Isaac Grisham and Sarah Mason. He married Lavada Bush in 1912. The Bush family was active gospel singers as well.