For almost 30 years I have been "piddling" with the hobby of writing songs. Not that writing songs is a waste of time; but mine might be. I do not consider myself a songwriter, but rather someone who enjoys experimenting with songs and songwriting. All my attempts, save one, are intended to be "Sacred Harp style" songs (that is, songs for Sacred Harp singers).

My oldest left in written record, though undated, is from around 1980. It is not an original composition. It is an arrangement merging parts of Old Hundred and Coronation. "Praise God from Whom all blessings flow, and crown Him Lord of all, &c." I'll called it New Fifty!* ;-) Following two more arrangements, in 1982 I tried to put down on paper an original tune that I had been singing to myself for awhile. I guess it had some redeeming value, and, with help from the Sacred Harp Book Committee, it remains my only published piece to date. Within a couple of weeks I had churned out another one. After that the process became a sporadic one, with about a dozen from then to 1993. Nothing to write home about -- a few that may be decent and some that shouldn't ever see the light of day. These are songs that actually reached completion. I also have this or that idea scrawled on various pieces of paper that I may or may not be able to find. I have no record of any completed tunes between 1993 and 2004. I'm not sure what I was doing. But recently -- the last 5 months -- I have gone on a spree that includes 14 completed tunes to date (and several unfinished). I really like a few of them, some bear the harsh metrical reality of being framed with no particular text in mind, some are mere exercises in curiosity, and some, well...are just bad. Some are directly inspired by another tune -- e.g. "Legion" is a minor tune inspired by "Unchanging Hand"** -- while many may reveal subconscious imitation of what I like best in songs and hymns. Don't hold your breath waiting for my chef-d'oeuvre. You might asphyxiate.

I admire those who have turned out masterful works of musical art. In the Sacred Harp field folks like B.F. White, M.M. Wynne, J.P. Rees, Edmund Dumas, Sarah Lancaster Hagler, A.M. Cagle, O.A. Parris, T.J. Allen, John W. Miller and on and on -- and many who are still living. As for myself, I am a plodder. I have little training in music and less in composing. I guess that never stopped a fool from rushing in where angels fear to tread. But the process is enjoyable, cathartic, and engages the mind in better pursuits than others it could be wasted on. Try it; you'll like it. Jump in. You'll learn to float, swim -- or drown.

I am not a rebel, but I'm not much of a follower of musical rules. Some I know and don't prefer. Some I don't know. For example, a standard rule in musical composition is to avoid parallel fifths and parallel octaves. Another is that the voices should not cross (alto should not go above the soprano, nor tenor above alto, etc.). Meanwhile, I write horizontally more so than vertically -- looking for four decent tunes that can be sung together rather than three parts that bring out a fourth part, the melody. I do not particularly conceive of the composition vertically, or as writing harmonies. I conceive of the task more horizontally, or as writing melodies. While I don’t want the tune to be an absolute vain jangling of inharmonious sound, I seek to write four parts that I think I would enjoy singing. I seek for the bulk of the tune to be concords, and confine discords usually to passing tones. To me anything but 2nd and 7th is concord. I tend toward the pentatonic scale when writing major, not using or using sparingly the fa (4th in the scale) and mi (7th in the scale). I don't use accidentals. While they may not be anathema to shape note, they are at least a nuisance.

I guess some things are or come close to being rules for me. These are generally attempts to follow the main framework of Sacred Harp tradition. Songs begin and end with a full measure; bass always ends on the tonic; minor tunes always end on the 1-5 dyad (or unison); the standard moods of time are 3 common, 2 triple and 2 compound (2/2, 4/4, 2/4, 3/2, 3/4, 6/4 and 6/8). I guess everything else in up in the air. The spirit of Billings should be good guide for composers – "I don’t think myself confin’d to any Rules for Composition laid down by any that went before me...I think it is best for every Composer to be his own Carver...Nature is the best dictator, for not all the hard, dry, studied rules that ever was prescribed, will not enable any person to form an air." Maybe you'll just naturally carve out something that no man has ever carved before.

An example of a recent attempt, dedicated to the Houston (TX) area singers 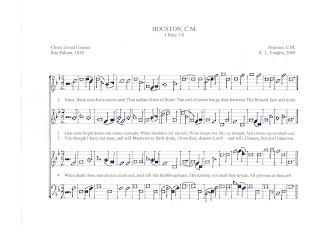 Above song © 2009. Click on the image to see a larger version
* Most of my tune names have serious underpinnings, but some, like "New Fifty", may seem a little silly. Some do not reveal the underpinning, as Ogilvie, the brand name of a hair permanent whose sweet fragrance was aromatizing the house while I was writing the tune with that name. A tune needs its own name in case it be separated from the words and joined to another.
** Hold To God's Unchanging Hand by Jennie Wilson (words), F. L. Eiland and Clyde Williams (music).
Hold To God's Unchanging Hand sung by Russ Taff is not exactly like we sang it, but will give you an idea. Another version, by Pastor Jerome Jackson
Some may be able to access a score HERE if you have the right software.
Posted by R. L. Vaughn at 10:25 PM

The writing of songs is a gift that God surely bestows.

Someone once said there were two types of songs, good and bad. Good if you favor it, and bad if you do not. I'm sure it's really a matter of opinion.

It seems that the art of songwriting has taken a new twist in recent times, regardless of the form or style. You now have professional songwriters who are hired just to write songs. Many times it will be a group effort. I believe the drawback to this is they eventually start to all sound the same, akin to something off an assembly line. Most of the best songs written have usually been spur-of-the moment ideas. A writer might hear an expression someone uses, and they will take this and develop a song around it.

I'm sure there have been many wonderful songs written that have never been heard by the masses for one reason or another. I just do not believe that as much emphasis is placed on the song as it once was. The listener of today too many times is looking for the "bells and whistles," so to speak, that goes along with the song. The lyrics tend to get lost in the shuffle.

I agree. A song can be a blessing if it is a blessing only to one or a few, even if the masses never know about it.

There is not as much emphasis on song and singing as there once was. And the emphasis that there is on song seems to be more about listening than singing.