A Singer and His Songs: E. W. Billups and The Sweet Songster

The Sweet Songster, a Collection of the Most Popular and Approved Songs, Hymns, and Ballads, Edward W. Billups, Catlettsburg, KY: C. L. McConnell, 1854 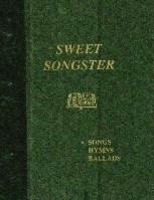 Arrowood Brothers Edition
David E. Whisnant said that E. W. Billups’s Sweet Songster “appears from the [Katherine Rebecca Pettit] diaries[1] to have been in widespread use in the area [eastern Kentucky, possibly circa 1900]” and that “...Josephine McGill reported that during her collecting trip to Knott County [Kentucky] in 1914 she found The Sweet Songster and the Thomas hymnal ‘owned by nearly every mountain family’.”[2]

Despite the recent spate of interest in the Old Regular Baptists and their lined-out hymnody, there is a dearth of information on Edward W. Billups and The Sweet Songster – one of their most popular hymn books.

The editor
Edward W. Billups was born about 1799 or 1800 in Virginia – in the 1850 U.S. Census in Putnam County, Virginia he is listed as 51 years old and his occupation is Baptist preacher. He was the son of Edward and Susan Webster Billups,[3] probably born in the part of Virginia that later became West Virginia. He married Elizabeth Beck or Beach in Kanawha County on January 16, 1822, and they were living in that county in the 1830 and 1840 censuses. In 1850 they are on the Putnam County census, but it is probable that he did not move. Putnam County was established in 1848 from Cabell County, Kanawha County and Mason County. The Billupses lived in a part of Kanawha that became Putnam County. By this time his wife Elizabeth had apparently died, as she is not listed. He had four children in this census (George W., Mary A., John and Mathew) – all born roughly between 1831 and 1839.

In the 1860 U.S. Census Edward W. Billups was living next door to his son, G. W. Billups at Ironton, Lawrence County, Ohio. G. W. was a silversmith. Edward was 60 years old and his occupation is “book peddler” – which is consistent with his publishing and selling the hymn book. In 1860 a Margaret Billups, 27 years old, was in the household with him. This may be his daughter, who is called Mary in 1850, or it could be possible that he remarried. Edward W. Billups has not been located after the 1860 census. He could have died between that time and the compiling of the 1870 census.

Elder John Sparks hinted Methodist origins behind the Songster, writing that E. D. Thomas’s hymn book “was compiled expressly for use in Baptist churches, but The Sweet Songster appears to have been originally a Methodist hymnal borrowed and adopted by some Appalachian United Baptists...”[4] The census records show that Billups was a Baptist, but his more generic book title and possibly more eclectic choice of hymns may suggest that he hoped for a wider audience than just Baptists. I haven’t been able to determine the kind of Baptists with which Billups was affiliated. Considering the hymn book is primarily used by Old Regular Baptists,[5] he was probably a Regular Baptist – at a time before the Regular Primitives and Old Regulars split.

The edition
The Sweet Songster is a small words-only hymn book, about 5" by 3-1/2" with 350 pages.[6] The title is creative or uncommon, compared to many hymn books of the period. According to Dictionary.com, a “songster” is “a person who sings; a writer of songs or poems; a poet; a songbird.” There might be some allusion to King David, who is called “the sweet psalmist of Israel” in 2nd Samuel 23:1. In poetry of this period, the “sweet songster” often referred to the nightingale bird.

The hymn book was printed for Billups at Catlettsburg, Kentucky by C. L. McConnell in 1854. According to a family genealogist, Edward’s father “died and his Will was read in 1853. Evidently Edward W. sold his large land inheritance to have the money to publish ‘The Sweet Songster’ in 1854.”[7] Edward may have moved to Ironton, Ohio by 1854, considering that Ironton is only about 10 miles up the Ohio River from Catlettsburg, Kentucky.[8]

The work contains hymns by noted hymnists such as Isaac Watts, Charles Wesley and John Newton. The largest number of credited hymns belong to Billups himself, though he is often an arranger rather than the original author. In his preface he wrote, “Those hymns marked with the author’s name, Billups, were composed entirely or in part by him.” The next to last hymn in the book, beginning “Once upon the heaving ocean,” is credited to his son, G. W. Billups.[9] Older hymn books credited as sources include Dover Selection (1828), Dupuy (1811), Sacred Melodies (1836), The Psalmist (1844) and Rippon (1787) – all Baptist sources.

Though Billups may have died within 8 to 16 years of the publication of his hymn book, it has retained popularity among the Old Regular Baptists and has remained in print to the present.[10] As far as I know, there is only one edition and no changes have been introduced. The Union Old Regular Baptist Church web site relates, “We sing out of words only song books.  The two most prominent are the Thomas Hymnal and the Sweet Songster. Our style of singing is called lined out hymnody.” According to The Baptist Library “The Sweet Songster is used by the Old Regular Baptist, United Baptist and some Primitive Baptist.”

Not everyone liked The Sweet Songster. The American Missionary (Volume 41 No. 4, April 1887, p. 109) labeled it religious doggerel, writing “The Sweet Songster is the name of a little hymn book published in Catlettsburg, Ky. It contains verses composed, compiled altered or amended, according to the sweet pleasure of one Edward W. Billups, D.D. There are some old familiar hymns scattered through the book, but often sadly marred by omission, alteration or addition. The poet shows his estimate of education as he describes the Christians of old: [hereafter follows the 4 lines of the third stanza of Charles Wesley’s “Primitive Christianity”.] [11]

Unabated by the conceit and condescension displayed by those like “The American Missionary,” numerous churches are pleased as they journey to sweetly sing their Savior’s worthy praise from the pages of a worthy hymn book appropriately named The Sweet Songster.

Footnotes
[1] Katherine Rebecca Pettit (1868–1936) was an American educator who was part of the “settlement school” movement in Appalachia in the early 20th century.
[2] All That Is Native and Fine: The Politics of Culture in an American Region, David E. Whisnant, Chapel Hill, NC: University of North Carolina Press, 1983, p. 281
[3] http://listsearches.rootsweb.com/th/read/BILLUPS/2008-08/1218205592
[4] The Roots of Appalachian Christianity: The Life and Legacy of Elder Shubal Stearns, Elder John Sparks, Lexington, KY: University Press of Kentucky, 2015 p. 235
[5] “The Thomas Hymnal and The Sweet Songster are both favored by the Old Regulars...” Sparks, p. 259
[6] The copy I have contains 350 pages with 285 numbered hymns, followed by 5 “choruses,” then 6 more hymns that are not numbered, then “A Form of Matrimony” (a short marriage ceremony), and a first lines index. No topical theme is noted or followed. Billups excluded hymns in particular metre – those “having no regularity” – from his compilation.
[7] E-mail from Rachel Harbour, spouse of a great-great-grandson of Edward W. Billups
[8] According to where Billups lived in Putnam County, Virginia, he might have been some 40 to 60 miles away from Catlettsburg – though that would not exclude him from using a publisher there, which might still have been the closest.
[9] This is a rearrangement of the rhyme pattern of a hymn by Mary Dana Shindler.
[10] For example, it was reprinted by Arrowood Brothers of Wayne, West Virginia in 1970, and the copy I obtained circa 2003 was reprinted by Fast Print of Greenup, Kentucky.
[11] See Hymn 70, Hymns for Children, and Others of Riper Years. I find it humorous that in their ignorance The American Missionary cited first an example of one of the two foremost writers of English hymnody, Charles Wesley, “the Sweet Bard of Methodism”. Of course, the thrust of this was to highlight the perceived ignorance of the people in their appeal for more workers and more money.
Posted by R. L. Vaughn at 8:59 AM

Thank you for this post. I believe I am descended from this Edward W. Bilups as well. I am looking for a copy of the original will from 1853. It has been transcribed and the date changed to 1883. I have not found how all the property was divided and would like to know! Ultimately, I am trying to see if this Edward W. Billups is the father of the Edward Billups who married Permelia Roberts in 1842. Thank you.

I am glad that was of some help to you. Interesting about the date change on the will. That is a transcription error, I assume? I do not have any further information at this time.

Thanks. Have a good day.

I have since found the will and and probate deeds! Yes, it was a transcription error regarding the will.
I have also located what I believe to be Elizabeth's entry in the 1850 mortality census.
It makes sense to me since she was not with Edward W. Billups in the 1850 census, both in Putnam County, Virginia.
Once I located the probate deeds, the sons of the senior Edward Billups (Robert and Samuel) are listed with their wives. A wife of Edward Billups is not mentioned. This also leads me to belive the mortality schedule pertains to Elizabeth Beach Billups.

Thanks so much! I appreciate your taking time to inform me of what you found about the will, probate, and Elizabeth Billups. Have a blest day.