Myra Smith Palmer was an active Sacred Harp singer for many years. She was born Nov. 15, 1916, and passed away Oct. 22, 2009 at age 92. Myra was the daughter of the late Austin Asberry and Vicy Lorraine (Getty) Smith. Her funeral was held Sunday the 24th in Lindale, and she was buried at the Union Chapel Cemetery. She was one of the few remaining students of Tom Denson. She was an accomplished singer and leader; among her favorite songs were Morning Sun, The Bitter Cup, Morgan and Shades of Night. 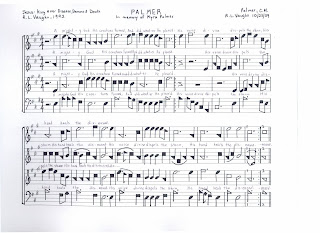 Email ThisBlogThis!Share to TwitterShare to FacebookShare to Pinterest
Labels: Memorial

As I was reading this about Mrs. Palmer's passing, the timeline caught my attention, and my mind drifted toward the subject of numbers.

As many of her generation that have left us, I thought about the next generation that is now starting to shrink. That would be those which were born in the 1930's. This generation is very important I believe, because it is the last one that was exposed to the old ways and got a taste of hard times. It does indeed distress me to think of what things will be like when this generation is gone. We are already seeing those who can or almost can be considered "post baby boomers" be elevated to high leadership positions. But we know God is in control.

It's so priceless, isn't it? You wouldn't trade it for anything. I think of the impact my grandparents left. The thing I regret was that I never told them what I really thought about them. However, I believe they know now.

I also start thinking about traditional musicians we are fortunate to still have with us. People like Ralph Stanley, Bobby Osborne, Wilma Lee Cooper, and Mac Wiseman. They are all national treasures.